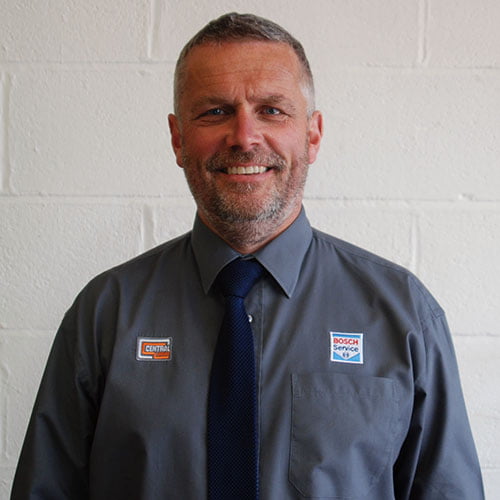 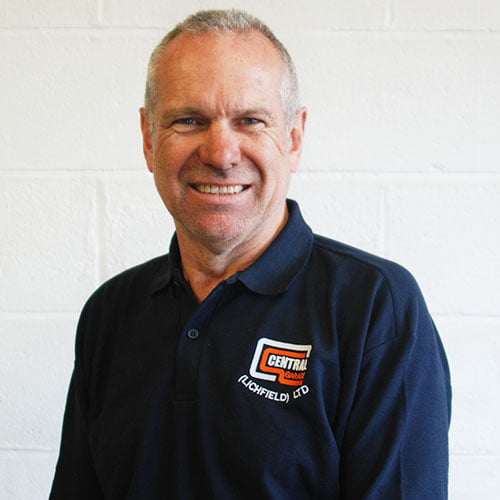 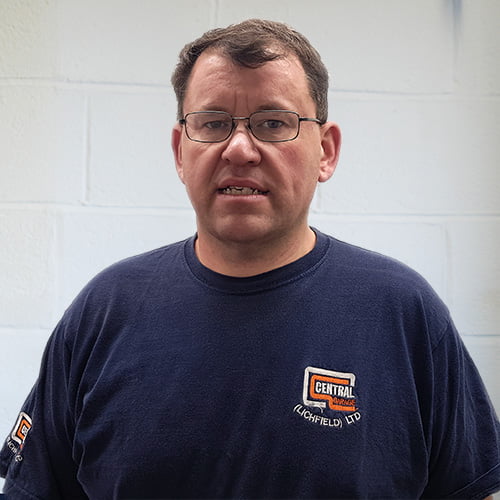 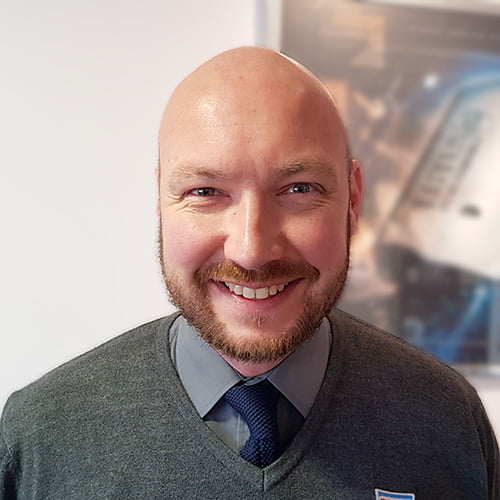 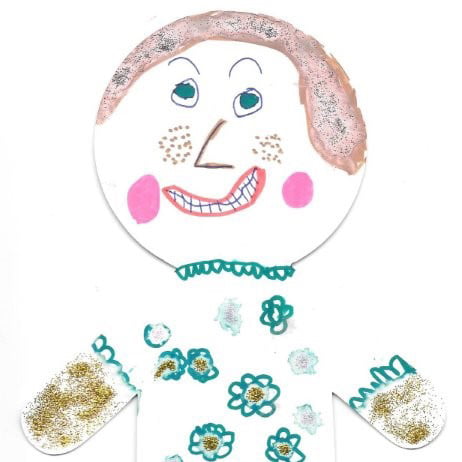 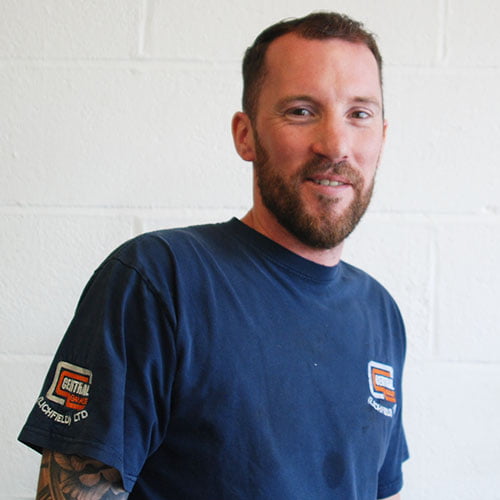 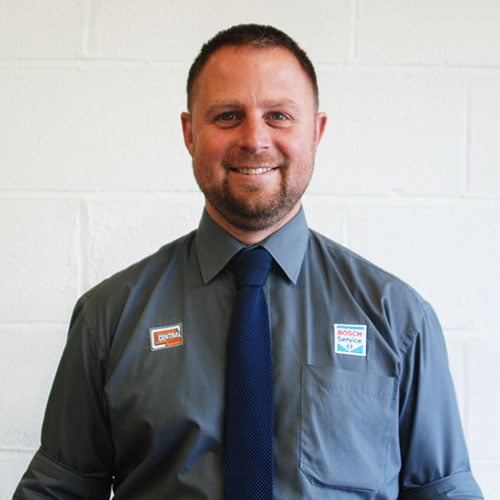 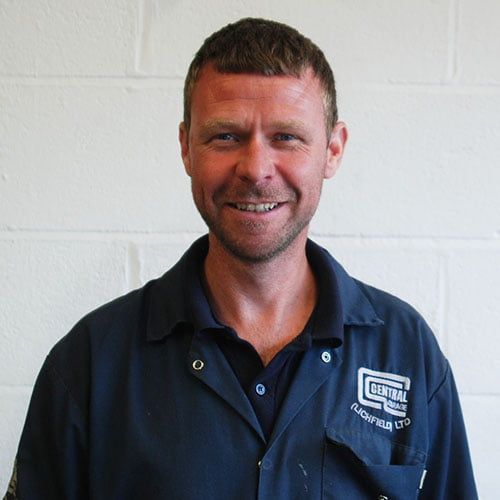 Andrew is one of our leads technicians, having been with us since school. He has served his apprenticeship and is now well on his way to completing his BDT.

Andrew takes on the largest strip downs, Discovery body-offs being one of his regular large jobs. He is married to Maria and they have a wizard footballing daughter, Connie. 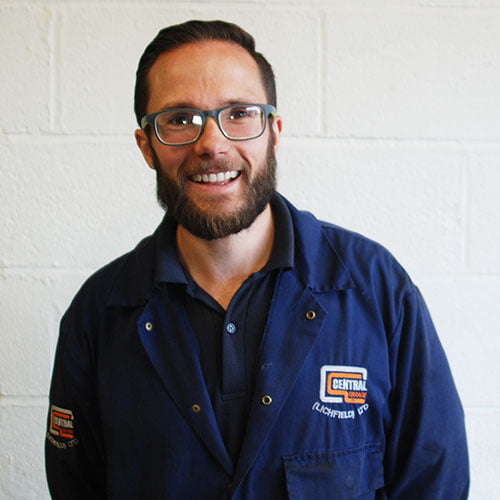 Ian served his apprenticeship at Honda, and since joining has become an MOT tester and started on the BDT at Bosch. Ian has also recently been married! 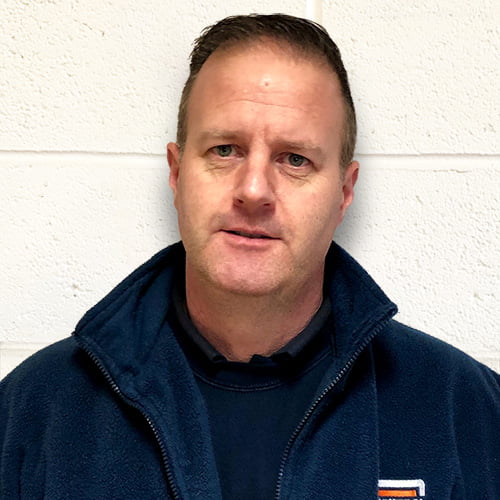 Our second part time driver. Nigel has completed 24 years with us as a body worker and is now enjoying the clean life as a driver. 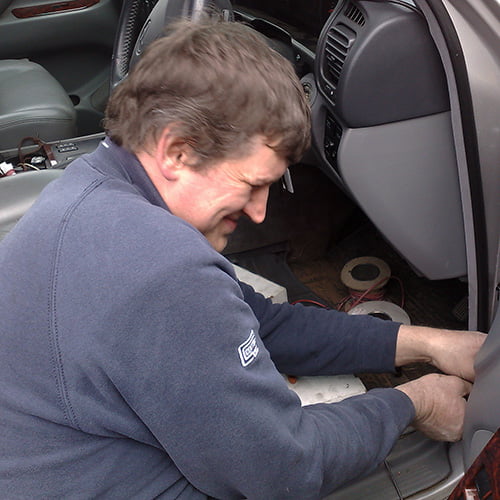 Our no.1 electrician, Romek is a highly skilled and experienced technician. Equally conversant in English, Polish and a bit of German. 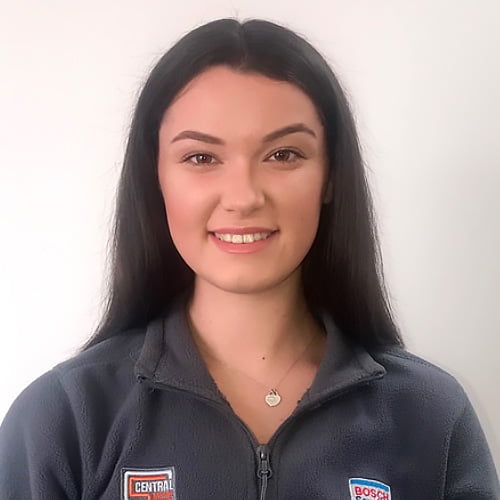 Abby helps on reception on Saturday mornings. She is the fourth generation of the family to work at Central Garage. 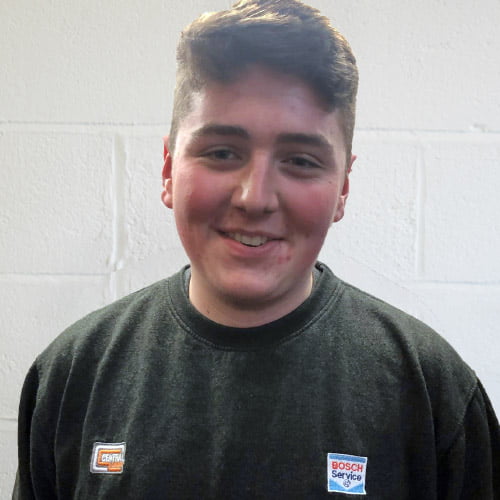 Jacob joined us in 2019 at sixteen. Already he’s the tallest in the business! He has joined as a BOSCH apprentice and travels to Doncaster for one week intensive courses three to four times a year. He is being mentored by Andy. 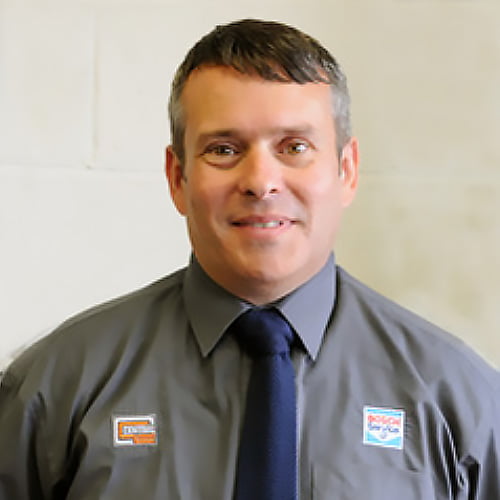 Michael joins us in July to help Chris in the reception and liaising with the workshop. He comes from a workshop background having started at Colliers as an apprentice, then technician, moving onto workshop controller at Colliers multi brand , then Volkswagen in Halesowen. 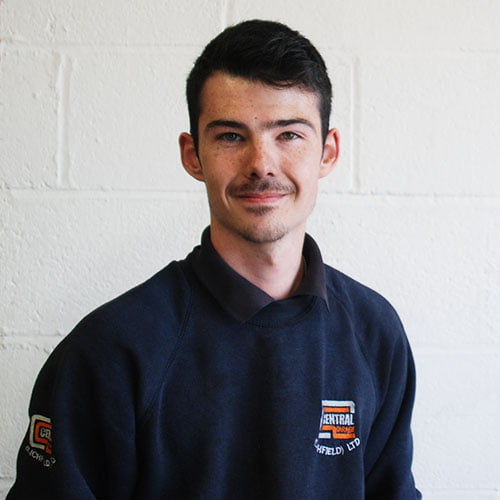 Sam has completed his apprenticeship and started on the BDT programme. He loves his Fiat Abarth sports cars. 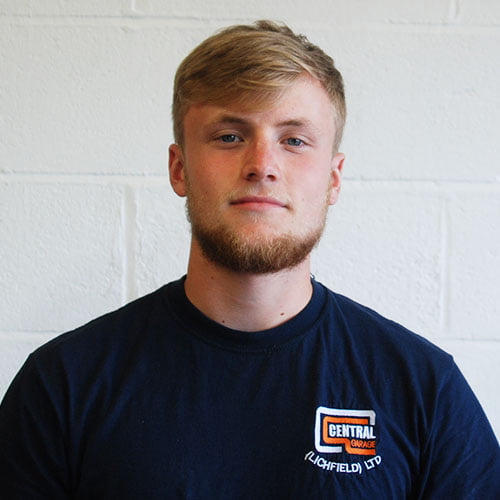 Aaron has been our junior car washer for a year. Since being with us we’ve put him through his driving test and have now enrolled him as a Bosch apprentice. His hobby is amateur boxing. 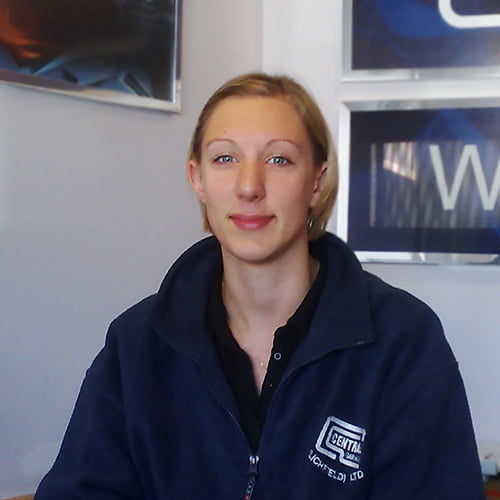 Gemma is our part time receptionist and deals with our online enquiries and bookings. She has been with us since 2007. In that time she has married, bought a house and had two children. 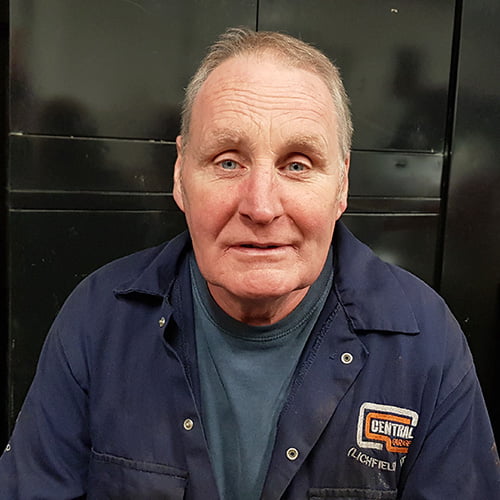 Dave is a former Vauxhall Master Tech. Now capable of servicing on all makes. He is an MOT tester as well.  He is happily married to Jacque and enjoys his evenings watching Emmerdale. 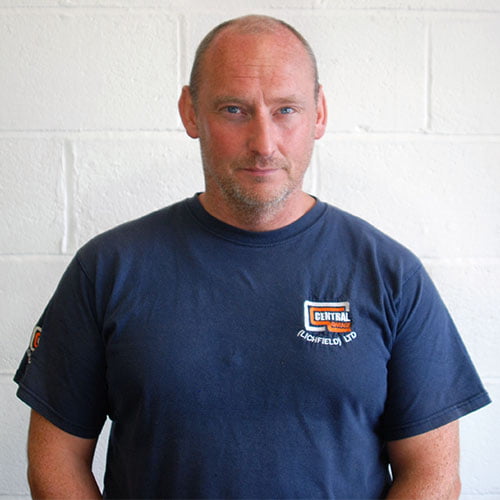 Paul is our head Valeter. He is our go to tech for trim or paint rectification. 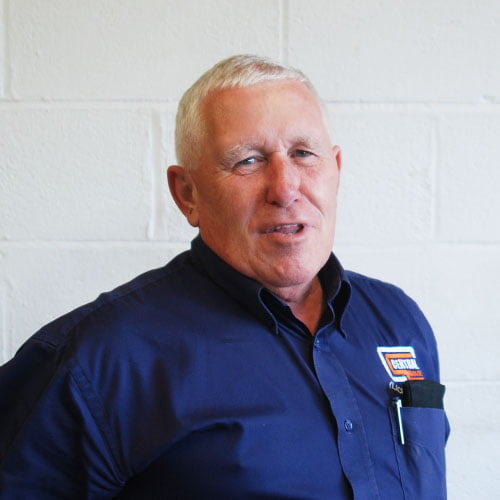 Martin has come to us from being a Master Tech with Volkswagen. Keen on all working on all ages of VW, Martin adds more depth of knowledge to one of our most common brands seen in the workshop.

David is the Managing Director of the Company. He is responsible for keeping staff up to date with technical information and diagnostic needs. He has an OND in Technology from Stafford College and a B.Sc. (Hons.) degree in Electronic Engineering from the University of Wales. Throughout University, David was sponsored by the MOD (Air force). He has a Master technician qualification from the ATA and is a qualified Bosch Diagnostic Technician (BDT). David is a representative for the Midlands area of Bosch Car Service Council. David is a Freeman of The Worshipful Company of Smiths, Lichfield’s oldest guild of craftsmen, having been invited into the Company in 2009.

David used to be sport mad, playing rugby, tennis, running, water skiing and swimming. He rowed competitively for thirteen years. He completed the London Marathon in 2000. Now with most parts worn out he sticks to a bit of mountain biking, golf and snow skiing in between visits to the Chiropractor. When he can, David likes to spend his time on his narrow boat, Lollipop.

David is a keen supporter of Marie Curie. He has cycled from top to bottom of Ireland, from London to Paris and London to Amsterdam to raise funds.

David has been an active member of Lichfield Round Table 250 and was Chairman for 2006/2007. He has now moved on to the Old boys club “Spires”, a 41 Club. He is married to Sue and they have a beautiful daughter who definitely takes her looks from her mother.

David can be regularly seen being dragged by his uncontrollable Dalmatian, Freddie around Lichfield.

Philip is the longest serving member of staff with some 30 years service. Philip runs the MOT side, keeping up to date with ever changing legislation on the MOT test. Being from the old school he is still the best man to “toil with carburettors” on the older vehicle. He has also gained Master Technician status with the ATA. Philip became a Director of the company in 2010.

Philip’s main pursuit is golf, being a nine handicapper. He has two children and is married to Jane.

David is another long serving member of the team, being with us from school. He served his apprenticeship with us and has never been afraid to turn his hand to anything. David showed an interest in bodywork and this evolved into us doing our own bodywork in house in the early nineties after previously sub-contracting. David implements new technology into the running of the paint shop. David now runs a body shop producing high quality repairs. David was made a Director in 2010. David has a son Josh who he supports with his hobby of Go-Karting.

Brenda has run the accounts for ten plus years. She comes from a bookkeeping background and brings extensive knowledge of Sage accounting and business information systems. Since her arrival, the company accounts have been over-hauled to ensure accurate costing of repair and maintenance projects to ultimately benefit both the company and the customer.

Chris is in charge of reception at Central. He worked as a Parts advisor at Vauxhall for eight years and then at Mercedes for seven and a half years. He is qualified to NVQ levels 1,2 and 3 in parts supply. He has several manufacturer qualifications from Mercedes and Vauxhall. Chris is engaged to Samantha. They enjoy walking their Labradors, Milo and Molly in the countryside or on the beach.

Andrew has been with us since leaving school. He attended Tamworth College during his apprenticeship. He is a qualified and current MOT tester. He has achieved Technician status. He has a son and daughter. He is currently on the Bosch Diagnostic Training programme (BDT).

Nickname ‘H’, Arron has been with us since school, with a small time spent at a Jaguar dealership. In the last few years, Arron moved away from the workshop floor to assist on reception. Away from work Arron enjoys cycling, drinking and fishing.

This website uses cookies to improve your experience while you navigate through the website. Out of these, the cookies that are categorized as necessary are stored on your browser as they are essential for the working of basic functionalities of the website. We also use third-party cookies that help us analyze and understand how you use this website. These cookies will be stored in your browser only with your consent. You also have the option to opt-out of these cookies. But opting out of some of these cookies may affect your browsing experience.
Necessary Always Enabled
Necessary cookies are absolutely essential for the website to function properly. This category only includes cookies that ensures basic functionalities and security features of the website. These cookies do not store any personal information.
Non-necessary
Any cookies that may not be particularly necessary for the website to function and is used specifically to collect user personal data via analytics, ads, other embedded contents are termed as non-necessary cookies. It is mandatory to procure user consent prior to running these cookies on your website.
SAVE & ACCEPT